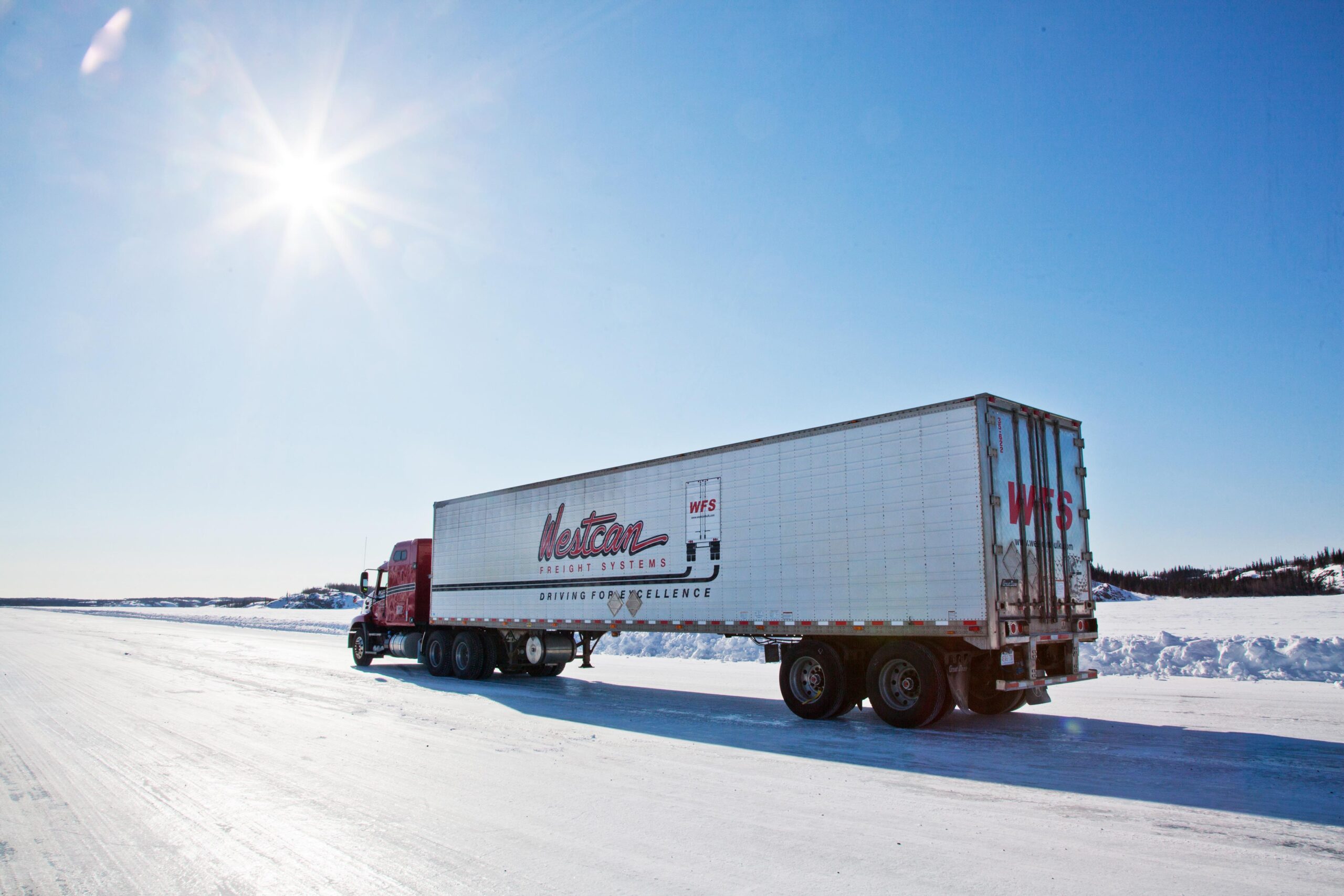 Building the Ice Road
RTL-Westcan is actually two companies in one. The Westcan side of the business hauls liquid and dry bulk commodities. The RTL side is a construction contractor that for many years has been one of the companies that “builds” the road each year, a process that takes about six weeks each fall.

Most of the road passes over frozen lakes, where it’s 130 feet wide to avoid blockages during blizzards and allow opposing trucks to pass. The other 15 percent traverses land between the lakes and narrows to a maximum of 33 feet. Along some stretches, additional “express lanes” are created where returning, empty trucks travel at speeds of 40 mph higher than the maximum 16 mph for the northbound, loaded tankers.

To ensure safety, the ice is regularly checked by GPR (Ground Penetrating Radar). Where the ice thins, water trucks are dispatched to add water to that area. The ice must be 39 inches thick to support a loaded tanker.

Everyone knows that reality shows wring as much drama as they can out of their topics. When it comes to the show Ice Road Truckers that ran for 11 seasons on The History Channel, Larry Wheaton, Vice President of Operations for KAG’s RTL-Westcan group, says that drama was overblown. He should know. He’s been in the transportation business for 40 years, and part of ice-road hauling for 30.

RTL-Westcan, a leading hauler of bulk commodities Canada, serves more than 500 customers across its operating region year-round. But, for two months out of the year, it also has a steady stream of tank trucks hauling fuel to the northernmost areas of Canada over the Tibbitt to Contwoyto Winter Road out of Yellowknife in Canada’s Northwest Territories province. It’s the world’s longest heavy-haul ice road.

For most people, Yellowknife is the end of the road going north. For RTL-Westcan drivers hauling fuel, it’s the jumping off point for their 350-mile drive over the winter road to resupply three diamond mines that operate there year-round. Wheaton describes driving the winter road as “… the safest thing we do as a company, much safer than being on a four-lane freeway.”

“Everyone on the winter road is a professional driver,” says Wheaton. “We don’t have to contend with the other drivers ‒ the ones who typically cause accidents. And we only travel at 16 mph when loaded, reduced to 6 mph in some sections.”

Still, it’s a challenging drive with some real dangers. That’s why trucks travel in groups of four, spaced about a third of a mile apart. The four trucks are in constant radio contact, with the lead truck warning those that follow of any issues.

“The coldest weather I experienced up there was -55 F, and that’s when you just hope your equipment doesn’t freeze up,” says Donald Chisolm, who drives the route. “A lot of times your visibility is cut back to only 20 feet. You’re driving on the road but seeing nothing but snow banks.”

His most unusual experience was when he couldn’t get into his truck for over an hour because of a wolverine roaming the area.

The driver shortage is a well-known problem in the Lower 48. Hiring drivers for the winter road haul is what Stephanie Theede, Westcan’s Vice President of Human Resources, calls “different.”

“Those drivers are away from their families for several months, which can be challenging for them,” Theede says. “But many of our drivers have a history driving that route year after year. For other drivers, it’s something they want to do once in their life. And we also do some seasonal recruiting to bring on new drivers every year. The bottom line is that we always find a way to fulfill the needs of our customers.”

While much is different about driving the ice road, there are some things that are very much the same for other RTL-Westcan and all KAG drivers.

“It takes in-depth, on-going training to make sure every driver has a safe trip,” Wheaton explains.“ There are some unique aspects to the training for our ice road drivers, but there are also some basics of safe operation that we make sure every one of our drivers understands and puts into practice.”